„If every standstill costs a small fortune, quality becomes an obligation!“ is how Dipl.-Ing. Ulrich Grziwotz, Team Leader for the Service & Development Team in the continuous casting division of ThyssenKrupp Steel AG in Duisburg-Bruckhausen, describes the requirements on components for his systems. The machine head with ingot mould and elevating platforms from SMS Demag AG and the integrated custom hydraulic cylinders from Herbert Hänchen GmbH & Co. KG are particularly important here. Because the oscillating movement of the ingot mould, driven by the custom hydraulic cylinder, ensures an optimum quality and smooth flow of 3 mn tons of high-tech steel every year. The 25t ingot mould hereby oscillates at up to 3 Hz with a random vibration profile. The guide accuracy of the machine head in a vertical and horizontal direction as well as the reproducibility of the processes hereby fulfil the highest quality demands. At 1.5 Hz in normal operation and a maximum frequency of 3 Hz, each linear drive performed 200 million load changes in 6 years before the cylinders were delivered to the Hänchen works in Ostfildern in the Spring of 2005 for an inspection.
Häko Product configurator

The steel manufactured in Germany is a precision product, even in the high production figures that are typical for steel production. Because today only top quality products stand a chance in the global trade of steel products. The surface finish, inner quality and mechanical properties decide on the success on the market and thus over profits and losses. One area which is decisive for the quality of the final product is the socalled ingot mould in which the water-cooled copper plates first harden the surface of the liquid steel. The ingot mould receives over 1,500°C hot steel from the topblown steel mill in 400-t ladles via the revolving ladle tower and distributing channel. The metallurgical challenge during continuous casting is to prevent the strand from sticking to the wall of the ingot mould and at the same time cool the strand so that a solid "strand shell" several mm thick has already formed by the time it enters the first segment. Even the slightest adhesion leads to irregularities in the steel because there is no continuous flow of material. If the strand sticks to strongly the solid strand shell that has already formed may tear. Tons of molten steel would then pour into the plant, the worst case scenario for continuous casting.

In order to avoid such a break-out during continuous casting the steel industry developed ingot mould oscillation systems in the early 1950ies. The oscillating movement of the ingot mould ensures that a fluxing agent, the casting flux, is introduced between the ingot mould wall and strand shell for lubrication purposes.
Following several development stages, which were dominated and pushed by SMS Demag, the current state-of-the-art is hydraulically driven resonance oscillation. ThyssenKrupp Steel AG in Duisburg-Bruckhausen uses a hydraulically driven short-lever oscillation system from SMS Demag AG. The molten flow of steel is formed into the rectangular, so-called strand in the ingot mould, which is molten on the inside and has a solid surface. The subsequent strand guide supports the strand. The strand is then fully hardened with spray cooling. This strand guide consists of 13 groups of rollers, the so-called segments, that have a number of tasks: they prevent the steel strand from bulging to size larger than a defined thickness of 215 mm at a width of 1,800 to 2,600 mm. And they align the strand from the vertical to the horizontal – with a radius of 9.3 m. Furthermore, they also allow a water cooling of the strand so that the steel strand is fully hardened when it is cut into slabs at the end of the casting machine.

The hydraulic ingot mould oscillation developed by SMS Demag AG ensures that the ingot mould always moves relative to the steel strand thanks to the use of a custom hydraulic cylinder. This oscillates continuously in a vertical direction, whereby the movement simultaneously is used to introduce the fluxing agent between the strand and wall of the ingot mould. Each of the elevating platforms in use are moved by two Hänchen hydraulic cylinders from the 328 series in a Servofloat® quality with the patented floating annular gap seal. 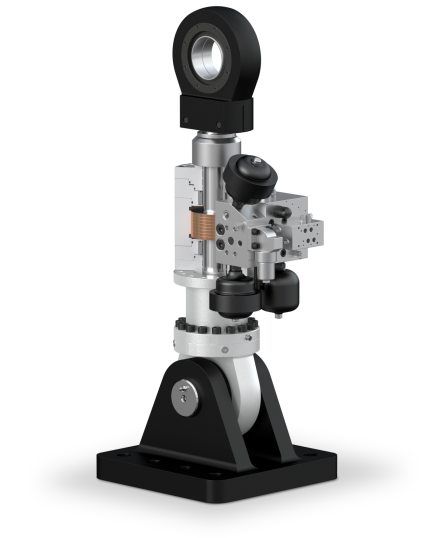 They oscillate during normal production with 80 vibrations per minute and a stroke of ±3-4 mm. The cam profile - like the amplitude and frequency – can be freely modified during operation to keep the relative movement of each single oscillation between the ingot mould and strand exactly constant. Since the strand itself has an inherent movement on account of the casting speed, the downwards movement of the ingot mould must be much faster than the strand's own movement. Hänchen thus designed the cylinder as highly dynamic and practically friction-less. The movement is recorded by a magnetostrictive position transducer system and controlled with an industrial PC, which in turn ensures the connection to the process control computer.
The patented floating annular gap seal in a Servofloat® design is used in the controlled servo hydraulic cylinders, that exert a force of 400 kN. A steel liner hereby follows the radial deflection of the piston rod with a seal gap of only a few 1/100 mm that is kept practically constant over the entire pressure range. However, this method only works with a production accuracy of a few μm since the leakage would otherwise lead to high hydraulic losses. Cylinders in a Servofloat® quality offer maximum positioning and repeating accuracy thanks to their negligible friction, are stick-slip-free and suitable for very slow and fast movements. Thanks to the practically friction-free design, this type of cylinder does not wear, even after extremely long periods of use. This corresponds to a requirements profile where maximum availability takes top priority. High demands are placed in particular on the purity of the fluid: the filter is replaced as necessary, the two pumps that generate the operating pressure of 260 bar are replaced every 35,000 hours. Particles are counted and the servo valve replaced once a year. 3D measurements on the elevating platform with an accuracy of 10 μm that record and show any change to the oscillating movement are also used for quality control.

„We originally planned to service or replace the cylinders each year“, reports the technical coordinator for maintenance at ThyssenKrupp Steel AG, Dipl.-Ing. Marc Ramacher. „But the replacement cycle for a general overhaul was initially increased to two, then four and now six years. Even after this period of time we still do not have to completely replace the Hänchen cylinders. They only have to be sent to Hänchen for a check and general overhaul.
In this way the machine head from SMS Demag AG together with the custom hydraulic cylinder from Hänchen helps uphold the proud claim of Thyssen- Krupp Steel AG of producing a good steel quality by continuous casting with maximum availability that is used throughout the world. ThyssenKrupp Steel AG produces five different types of steel in Duisburg:
At the end of the casting machine the strand is cut into slabs lengthwise and crosswise by fully automated cutting torches. Transport rollers and cranes bring the slabs to thew stores. On their way from the ingot mold to the store they pass through the entire colour spectrum from white hot, all shades of red hot through to steel grey, the same colour as the blanks for the custom hydraulic cylinders that move the heavy ingot moulds used to produce new steel qualities.
Jörg Beyer, mediaword
© Hänchen 2006