Eleven fully-automated foundry centres with integrated robots for deburring the castings form the core of the pressure die-casting department at Auto Heinen. They operate with a closing force of 220 to 630 tons. In addition to this there are two 600 ton foundry centres without automated deburring. This is where modules and pressure die-casting special parts made of aluminium alloys are manufactured.
One component, which must fulfil the most stringent of requirements, is the industrial hydraulic cylinder for the pressure die-casting systems, which are responsible for movements performed precisely and with great force of mould stamps and sliders as well as other bulky parts. For a long time now the company located in Germany's Eifel region has relied on industrial hydraulic cylinders made by Herbert Hänchen GmbH in Ostfildern near Stuttgart, Germany.
Häko Product configurator 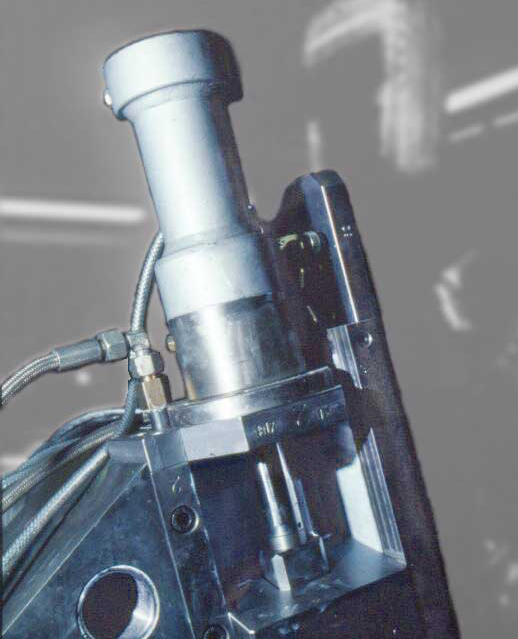 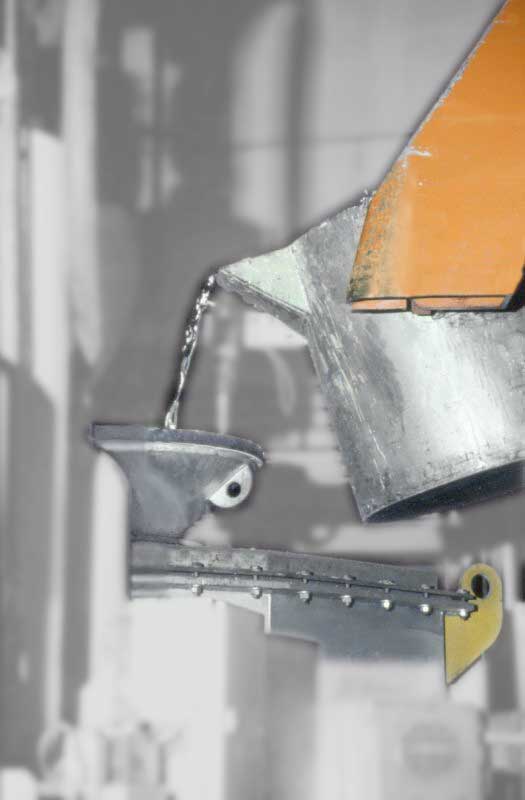 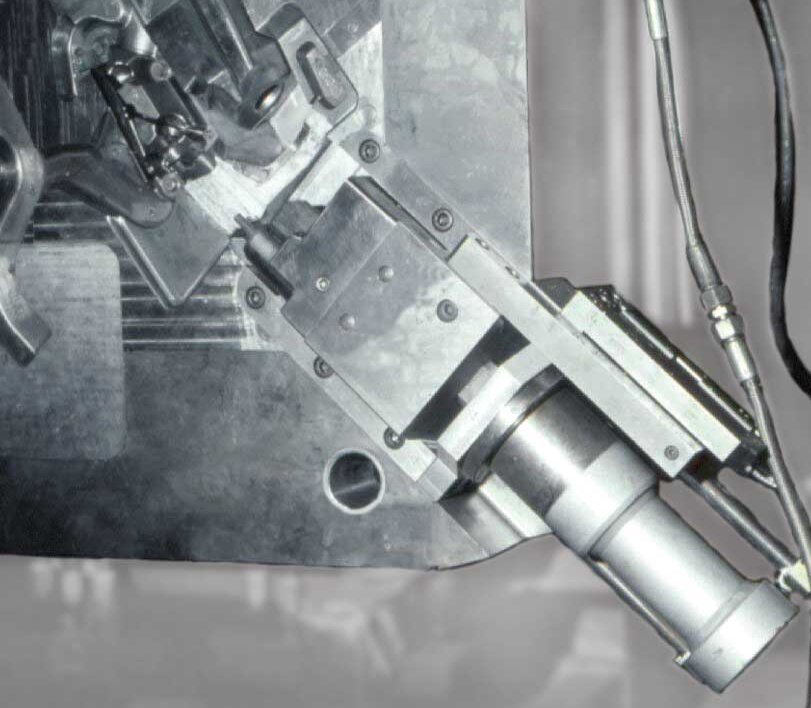 Pressure die-casting for the car industry
"We ask a lot of the systems and components in our foundry, as the car industry demands only the best from us", emphasised Robert Mahlberg, head of pressure die-casting production at the Auto Heinen GmbH company based in Münstereifel, Germany. And he knows what he is talking about: The company is charged by some of its customers with the task of checking the quality of its safety-relevant components on its own and then delivering them straight to the assembly line. In order to be capable of fulfilling the requirements of the branch to a specific degree, up to nine different alloys are now used, which are processed at temperatures between 660 and 720°C. One electric and eight gasoperated ovens heat up the alloys, which are then transported in molten form to the foundry centre's batching ovens.

Actual pressure die-casting injection
Now, first of all the mould stamps, which weigh up to 50 kg, are positioned by the Hänchen hydraulic cylinders and the dies closed by the casting machine. Then the die-casting system's filling chamber is charged with the required quantity of metal for each injection by applying pressure to the molten metal surface of the batching oven, using compressed air. Finally the molten metal is compressed during the 'injection'. In doing so the piston rod for the casting machine's injection cylinder applies pressure to the so-called casting distribution tray. This filling chamber for the molten metals is connected to the mould cavities via the casting channels, which are thus held under pressure by the molten alloy. This way the alloy can enter, at a specified pressure and temperature, the moulding cavities formed by the sliders and cores. The rough-prepared parts for the actual die-cast article are cooled down here. For the steering-gear casings the pasty aluminium alloy is passivated and squeezed once again by a stamp, which is also operated by a industrial hydraulic cylinder made by the Swabian hydraulic specialist. Finally the injection is cooled down in the sealed mould. The mould opens and a robot removes each respective injection. It then places the injection into a cutting tool, which then cuts out the distributor tray, the overflow bean-shaped side recesses and channels. Depending upon the job and the system, the parts are delivered as rough parts, semi or finished products to the contractor.

Up to 1,000 bar cylinder backpressure
There are more tasks for the hydraulics in this particular application field: The ambient temperature in the vicinity of the molten metals and moulds is high. A specific casting pressure of 400 bar is built up in the mould. For technical parts the pressure is 600 bar and for steeringgear casings and other pressure-tight parts 1,000 bars. This casting pressure generates a hydraulic force through the molten metal which contacts the mould. The Hänchen cylinders thus have a hydraulic backpressure applied to them. As - for design reasons - the industrial hydraulic cylinder retaining plates cannot be centrally mounted on the pressure die-casting moulds lateral forces cannot be ruled out. Problem areas are thus the seals because of thermal stabilities, the piston-rod guides because of lateral forces and the passive resistance to pressure of the entire industrial hydraulic cylinder because of backpressure.

Problematic framework conditions
"In the light of these problematical preconditions Hänchen has proved its worth in an outstanding manner", according to Mahlberg. "Wherever problems occurred, then they were down to thermal overloading on our part. And, particularly since the use of Viton sealings and the new Teflon lip-type seals, the problem of seal wear has been eradicated." The casting moulds, which are designed by the company itself, produced externally, but serviced and repaired in the company's own workshop, have in the meantime been designed such that the industrial hydraulic cylinders can be subjected to a maximum temperature of 70 °C. In particularly critical areas in thermal terms, additional spacers or cooling rings are used, in order to minimise heat conductivity between the pressure die-casting system and industrial hydrualic cylinders. In this area Auto Heinen has gathered a comprehensive range of experience: "The most extreme example was that of a cylinder whose seal had an exceptionally short service life. When it was investigated, it was discovered that the hydraulic cylinder had been subjected to extreme thermal loads. By relocating the heater system using the simplest of means this problem was able to be rectified. However, all in all the thermal stability of the Hänchen products is a central positive item", is how the head of the pressure die-casting production put it. By the way, hydraulic cylinders from Ostfildern are also used by the manufacturers of pressure die-casting machines for the positioning of machine columns and hexagon cap nuts.

"In the light of these problematical preconditions Hänchen has proved its worth in an outstanding manner."
Robert Mahlberg, Auto Heinen

Industrial hydraulic cylinder stability
The casting moulds are designed for production of 100,000 injections for a cycle period of 30 to 60 seconds. The pressure die-casting specialist emphasised that cylinders can bear these loads without the need to change the seals: "During the start-up phase we had some excellent experience with products from other manufacturers. "Service lives were distinctly lower, whereby thermal loads and lateral forces lead to excessive wear." In doing so the foundry uses almost only catalogue cylinders from the 120 series in the Hänchen electronic catalogue E-Kat (today product configurator HäKo), which operate with an operating pressure of 160 bar. They have been modified for ambient temperatures of up to a maximum of 200 °C through special sealing combinations and leak-oil connection and are thus suitable for medium HFCs. Apart from this slight modification this is also a favourably priced series cylinder. For reasons of space one cylinder is a special design, another operates over a pressure transmitter with 300 bar. The specific casting pressure, which is applied to a particularly large surface area on the slider, generates forces of 56 tons. This pressure is held solely by the Hänchen hydraulic cylinders, into which for this reason a backpressure valve is integrated, which can be hydraulically released.

Ordering by HäKo
Orders at Auto Heinen are effected solely by way of the electronic catalogue. The unanimous opinion: Significantly more practical than a hard-copy catalogue. After 100,000 load cycles the seals are replaced and the cylinder can be used again. If the corresponding mould is no longer used, the cylinders are put into store and used again when the occasion demands for new moulds. Decisive for Mahlberg here is the fact that - even for 20-year old cylinders - he can still receive spare seals within the briefest of periods using the product number; parts which naturally are now made of state-of-the-art materials such as Teflon.

Products
Thus hydraulic cylinders can be used to help create particularly vibration-resistant assembly brackets for engines, gearboxes and other units, hydraulic parts such as adapters, coolant regulators, clutch releasers and steering-gear casings, pump covers and actuating pistons, complicated housings for camshaft bearings and cylinder head as well as for gearshift actuator parts such as gearshift forks, swinging forks and actuators. In addition to this there are also pedal supports, internal gearshifts, planetary wheel carriers and balancer shafts. These task areas place extraordinary demands on pressure tightness, strength, wear resistance and complexity, standards, which are reflected in the demands posed by the car industry. It is here that Heinen has customers such as Ford, DaimlerChrysler, Volkswagen, Porsche, Visteon, INA, Bosch, Mahle, Getrag and LuK. They demand parts which can have a service life that will last for a driven distance of 200,000 without any problem. Auto Heinen expects its suppliers to provide the same quality; one reason why Hänchen hydraulic cylinders in Bad Münstereifel are a recognised standard.