Servohydraulic lifecycle tests are also the current industry standard for automobile components that are used far beyond safety-related structural elements. The challenge for such testing facilities lies in bringing together widely varying technologies at the highest level. With this, the users particularly place high demands on the servo hydraulic actuator for test systems and realtime control.

The development service provider, IAV GmbH, from Gifhorn has taken such a servohydraulic seat test stand into operation, which is controlled by a digital servocontroller from FCS Control-Systems. Hänchen Hydraulik supplied the servo hydraulic test actuator for the drive of the test stand.

That's what sets us apart:

Figure 1 FCS test stand for seats with dummy
Figure 2 Servo hydraulic test actuator with bladder and diaphragm accumulator
Figure 3 The Smartest digital controller can be used in stand-alone operation and with its own 20-GB hard drive for programs, test cycles, and logs

The testing takes place with a Hänchen servo hydraulic actuator of the former type series 328 (now series 320) as an actuator. In this constant velocity servo hydraulic actuator, the patented floating annular gap seal by Hänchen with the brand name, Servofloat®, is used. With this, a steel liner follows the radial deflection of the piston rod with a sealing gap of a few 1/100 mm over practically the entire pressure range. This type series only distinguishes itself through its somewhat higher sensitivity to lateral forces from a cylinder with a hydrostatically supported piston rod guide, but provides a cost benefit of around 30 %. After all, only the leak oil seals cause a negligible minimum amount of friction. Through their negligible friction, servo hydraulic actuators in Servofloat® quality offer the highest positioning and repetition precision, are stick-slip-free and suited to extremely slow and fast movements.

Thus, the seat test stand works in standard operation with a test load of up to 28 kN, with a frequency of maximum 20 Hz, a dynamic lift of up to 35 mm, a speed of up to 1.3 m/s and acceleration of up to 50 m/s. Nevertheless, it possesses high safety reserves that ensure optimum operation: The technically admissible maximum speed, for example, is 4 m/s. 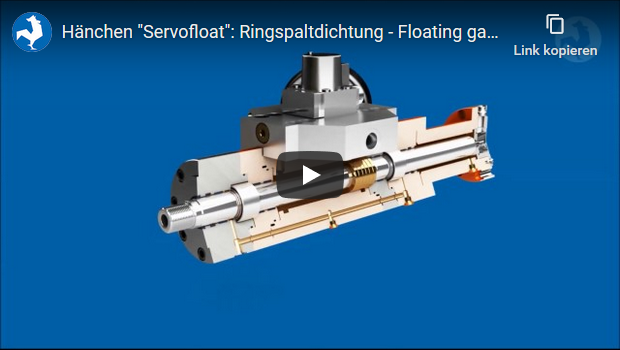 Video for the Servofloat® version

This testing facility not only tests complete seat structures, but also adjustment equipment, backrests, lordosis supports, springs, rails and covering components. Furthermore, foam components can be tested for tears and breakages and the intrusion of a part into another material, which is derived from the hysteresis shift.

We will be pleased to advise you on selecting your test actuator. Just contact us.
Call now Write us

Upon starting the system, a hydrodynamic oil flow is built up in the annular gap seal via the cylinder chambers, so that the annular gap seal moves radially around the piston road without touching metal, “floating” and in a self-centring manner. The escaping leak oil is fed back into the fluid loop without pressure, through a collective connection. The lack of a tangential seal that is subjected to pressure minimizes the static and dynamic friction in the servo hydraulic actuator. Because no hydrodynamic lubricant film is required through the relative movement of the gliding partners, a stick-slip-free movement can take place, even in the range of smallest amplitudes and speeds. The annular gap seal only has a pressure reduction function with the slightest leak, so that the piston rod is guided with friction-optimised bands. Nevertheless, even a servo hydraulic actuator with a floating annular gap seal can absorb certain transverse forces. In concrete application, 1.2 kN is admissible, which is absorbed by plastic guide bands. The 328 (now series 320) series furthermore has dry-running operational features that additionally increase operating reliability through the piston and bearing surfaces that are coated with specialised bronze.

The oil supply is of crucial importance to the effectiveness of the floating annular gap seal. The cleaner the oil is, the more reliably the system works. If the particles in the oil are not larger than of the smallest gap height, the split rings do not wear. Therefore, Hänchen recommends purity class 13/11 according to ISO 4406. In the testing and inspection systems, hydraulic cylinders with the floating annular gap seal offer a true high-performance cylinder with a distinct price advantage over cylinders with a hydrostatically supported piston rod guide. Hänchen Hydraulik also offers these high-end cylinders, which can compensate a maximum possible amount of transverse force. As the start-up friction is omitted, the stick-slip-free operation is also ensured with the lowest piston speeds. Only through the pressure- free stripping away seal elements is a low residual friction available, which is constant over the entire pressure range. Through this, the complex and workplace-contaminating suction removal of leak oil is avoided.

"FCS and Hänchen work together in a very flexible and committed manner."
Andreas Hesse, FCS

Through the chassis mounted directly on the cylinder for the servo valve, a compact servocylinder system is created for the highest dynamic requirements. The catalogue cylinder selected by FCS and used by IAV has a chassis for every proportional servo valve and each of one membrane and bubble storage for compensating the pulsation of the pump and other disturbances in the fluid flow. Already in series production, the cylinders contain specifically selected low-backlash hinge bearing and an emergency final position damper, in this application with 10 mm. Two inductive position sensors integrated in the cylinder, as well as an attached acceleration recorder and load cell provide the control of the necessary data.

The decisive point with this is the Z-axis moved by the servo hydraulic actuator for test systems, which the FCS digital controller, “ SmarTEST One“ controls through a control loop that is addressed through direction and acceleration. In contrast, the Y-axis is regulated by a crank drive. It triggers overlaid translatory sinusoidal movement. “ SmarTEST One” is a universal digital controller that can be used in stand-alone operation without a PC and with its own 20 GB hard disk for programmes, test cycles and protocols. Each unit can address up to four channels concurrently and coordinated with one another. The larger FCS systems control more than 300 channels. Most of the functions can be set through an ergonomic single-knob control and a display in VGA format, a PC keyboard can be easily connected. The controller can automatically identify and calibrate transmitters. At the core of smallest system by FCS is the SmarTest Control Unit, which has already proven itself more than 1,000 times in products of the Dutch controls specialist. This processor system distinguishes itself, among other things, through a series of safety functions, such as independent self-tests, fault-protected design and independent test of all entries through user-defined specifications. In addition to conventional functions, “SmarTESTOne” enables the editing of the wave form. Signal processing and preparation takes place through the “FasTEST Manager” software by FCS. It generates load time sequence plots and adapts these through a high-capacity iteration process. With this, both analogue and digital data are processed, as required. Thus, despite the 20 Hz of the actuator, highly dynamic loads beyond derived sinusoidal functions can be simulated, as they occur on a gravel piste, for example. This places just as high demands on the process pulse of the controller as it does on the hydraulic cylinder.

Thus, the IAV test system can drive the majority of the test cycles prescribed by the automobile industry. The second axis ensures that the dummy slides around on the seat in a realistic manner, so that the test stand also simulates fabric wear through transverse movements. Up to three backrest or seat frames with a backside/seat back dummy have space on the test rig and can therefore be tested at the same time. The actual test know-how is brought into the system by the IAV: the programming of realistic test processes, the interplay of the components and the advisory of the user. Particularly when weak areas are shown through tears, breakages, wear or settlement, the specialists provide advice regarding defect elimination. With the test stand, the companies offer an equally high-performance and economical test facility, in order to test components under conditions that are as realistic as possible. According to Team Leader, Dipl.-Ing Andreas Hesse, the crucial point for the collaboration is “that FCS and Hänchen work together in a very flexible and committed manner and that both companies carry out good quality realisation, even in smaller projects.”